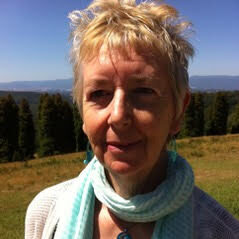 Carol was born in London, at the end of the Northern Line. She fell in love with theatre at the Old Vic and music on the BBC Home Service. After dropping early ambitions to be another Judi Dench or Joan Sutherland, she opted to study French and English literature at university.

In 1987 Carol migrated to Australia as an arts journalist. She worked her way up from gig reviewer for the Melbourne street press to senior journalist and magazine editor. Along the way, she realised her musical ambitions as a bass guitarist with The Invisible Opera Company of Tibet, a folk-rock group from Byron Bay.

Since completing a Postgraduate Diploma in Creative Writing in 2006 she has focussed on writing memoir, short stories and personal essays.

Carol has taught creative writing to community groups and been a regular storyteller to adults at Stonnington Libraries. She still loves an audience, but also enjoys the quiet pursuits of crafting stories, playing bass guitar with her daughter on piano, and learning to draw.

Carol’s stories and memoir have been published in the anthologies Melbourne Subjective, Vine Leaves, Ink3, Newcastle Short Story Award, and By Women for Women (Amazon).

She has published 50 book reviews in Australian Book Review, travel features for The Age, interviews with authors for The Canberra Times and 100s of performing arts reviews for Australian Stage Online.