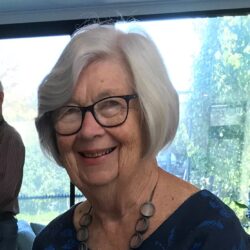 Originally a Sydney girl, Margaret, with her husband and young family, moved to Albury-Wodonga in 1981. Her employment experience has been in Administration, mainly in the education sector: school education and TAFE in State and Catholic systems in both NSW and Victoria. She also studied for her BA off-campus through Deakin and Charles Sturt Universities and kept up a connection with the Deakin Literary Society until the Melbourne group recently had to be disbanded. During that time Margaret became a member of SWWVIC, and gained valuable writing confidence through one of the postal groups.

When Booranga Writers Albury was established by a group of local writers, Margaret allowed membership of SWWVIC to lapse and became a founding member of the local group. This led to involvement in a variety of Community projects including street theatre, a progressive novel and the establishment of the Write Around the Murray Writers Festival.

She regularly contributed to the anthology DLS produced annually. And has been published in Eurika Street, and Booranga Writers, Wagga’s annual anthology 4W

A move to Melbourne gave the opportunity to become more active in DLS, Melbourne and the opportunity to re-join SWWVIC. The disbanding of DLS, Melbourne had resulted in a period of severe writers’ block and inactivity. Margaret is now finding inspiration to write again with the help of two SWWVIC programs: Let’s Write which uses written prompts and photographs to stimulate ideas and Spring which brings together a group of writers who submit work for comment and who in turn make useful comment on the work of other members.