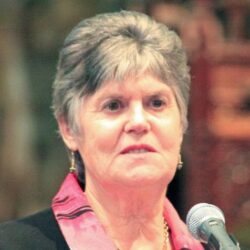 The need to write poetry visited Maree in 2004 when she found the words of her first poem running around in her head. This led to her joining The Wordsmiths of Melbourne poetry group in 2005. She has been a committee member of the publishing arm of the group – Poetica Christi Press since 2007 and was elected as Treasurer in 2008. Over the years, her poems have been published in many Poetica Christi Press anthologies. She is now the Administration Manager and web master. She is also an editor and proof reader.

Her carefree childhood was spent in the small West Wimmera town of Dimboola bordered by the Wimmera River and the Little Desert and it was during these early years that she developed a lasting love of untamed nature and bush walking before moving to Melbourne in her teenage years to complete her studies.

A china painter and amateur photographer she responds emotionally to visual imagery.

She published her first book Threshold – A miscellany – Poems of Country and City in February 2015.
It’s available here from the Poetica Christi website.