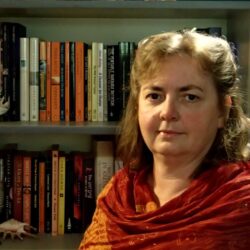 Jane Downing was born in Australia but was taken to live on Manus Island a month later. She has since lived in Tanzania, Ireland, Indonesia, the (then) USSR, China, the Marshall Islands and Guam, as well as Canberra, and now Albury. While living and working in the Marshall Islands, where truth was often stranger than fiction, she began to write.

She has had three novels published, as well as a short story collection and a poetry collection. Individual short stories have been published in journals around Australia and overseas, including in The Big Issue, Southerly, Westerly, Overland, Griffith Review, Island, Antipodes (US), Headland (NZ), Kunapipi (Denmark), Paris Transcontinental (France) and Silverfish (Malaysia). She also has many poems published including in Meanjin, Cordite, Rabbit, Bluepepper, Poetrix, the Canberra Times and Best Australian Poems (2004 & 2015).

Downing was awarded a Doctor of Creative Arts degree from the University of Technology, Sydney in 2012 and taught creative writing at Charles Sturt University, Albury from 2007-2017.

Searching for the Volcano and other Stories, four W press, 1999.

Shortlisted (out of 4000 entries from 47 countries) for the Commonwealth Short Story Prize, 2016.