Winner of the Nance Donkin Award for children’s literature 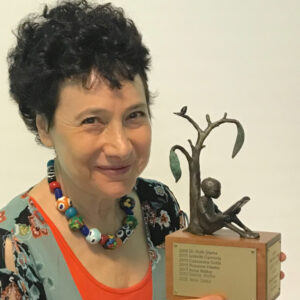 Melbourne-based children’s author Anna Ciddor has been awarded the Nance Donkin Award for Children’s Literature during an event celebrating Australian children’s literature. Ciddor is the seventh person to receive the biennial award which was established in 2009 following the death of writer and journalist Nance Donkin, OAM, a long-term member and supporter of the Society of Women Writers Victoria and past president of the Victorian branch of the Children’s Book Council (1967 – 1975).

Nance was determined to validate authors of books for children and to encourage and make known a good writer for children deserving more recognition, and the Nance Donkin Award, established in her memory, does just that.

Former maths teacher, Anna Ciddor, turned her hand to writing after the birth of her children. Writing became a way to satisfy her fascination with the gossipy details in history, not the boring facts of kings and queens and wars won or lost, but the ins and outs of the lives of the people of that time. It is this fascination that has kept her motivated throughout her career of thirty years as a writer.

She writes with a liveliness that is captivating, even addictive, not just for children but also for the lucky adults who also find themselves reading her books – again and again. This is especially true of Anna’s latest publication, ‘The Boy who Stepped Through Time’.

When Perry steps into a crumbling ruin while on holiday in France, he is not expecting to be transported back 1700 years to Roman times. While he hunts desperately for a way home, he must blend in as a slave – even if it means eating mice for dinner! Gradually, Perry is caught up in the fascinating world of grand Villa Rubia and a life he could never have imagined. But when he makes a new friend, he thinks he might already know her terrible fate. Perry is faced with an impossible choice: to find his way home or stay and guard his friend’s life – and risk being trapped in the past forever…

Congratulations Anna on being the 2021 recipient of the Nance Donkin Award.